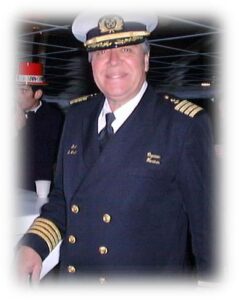 Winston Knauss, in 1976, purchased the Dine-O-Mite, a 28 foot dinner boat.  Two years later, he built a 40 foot vessel and named it Wrecking Crew in recognition of his AAA Wrecking Crew demolition company. He relocated the boats to the New River in Fort Lauderdale.  At first the charters did not offer onboard catering. This changed when entertainment great Liza Minnelli chartered the yacht and insisted on an elaborate seafood buffet featuring Jumbo Shrimp, Fresh Shucked Oysters and Extra Large Florida Stone Crabs.

Winston loved to captain his yachts himself but also taught many young men and women the craft.  He continued to build boats naming them Wrecking Krew.  Twenty years after building his first boat, he continued with a new boat every year, with the new name of SIR WINSTON.  Each one was bigger and better than the last.

​​​​​​​Winston Knauss is designer, builder, owner and captain of the most unique charter yachts in the world! Winston is going to celebrate his 42nd year owning and operating his Charter Business in South Florida.

Explore the most beautiful waterways in South Florida.
Make your dreams come true!